August 31, 2012
Sea urchins are one of beautiful marine creatures that come in many sizes and colors. They are non-aggressive and may be found all over the world in the shallow, rocky bottoms, or between the sea grasses. Sea urchins are also infamous for their venomous spines that often accidentally injured people on the beach. But the fact is most of sea urchins are not venomous. The venomous urchins are characterized by the long sharp spine such in the family Diadematidae or the bright fiery color as present in the fire urchin.
On my trip to Nusa Dua, Bali, I encountered several species of urchins. Some look dangerous, but some are so pretty.

Cake Urchin
Cake urchins or collector urchins (Tripneustes gratilla) are not venomous. They are edible and in some part of the world their gonads (mistakenly known as “urchin’s roe”) are considered as delicacy. This urchin is also exploited in Bali. Scientific reports from Indonesian Scientific Institusion (LIPI) stated that the cake urchins population in Bali is declining. 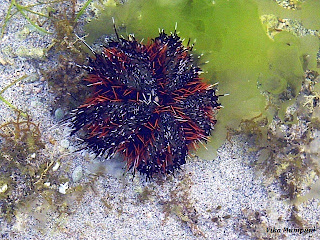 This Echinometra mathaei urchin is also not venomous and the spines have smooth rubbery texture. I wore rubber glove just for protection since I was observing the venomous urchins also. 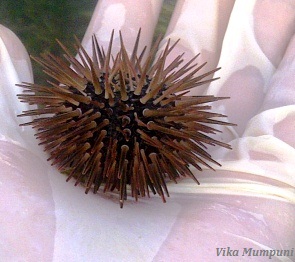 Diadema Setosum
This long-spined urchin is mildly venomous. Special characteristic of the species is the presence of a bright, orange ring around the urchin's periproctal cone (anus). 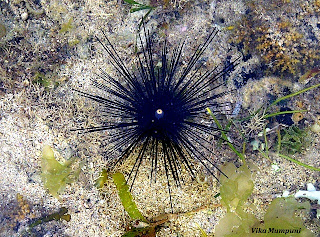 Diadema Savignyi
This is another urchin species which is mildly venomous. The characteristic of a Diadema savignyi is its long spines are predominately black with light blue lines around its periproctal cone . 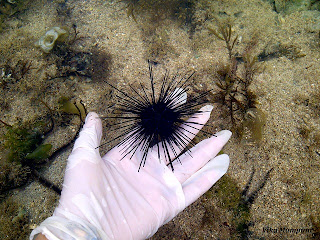 The light blue lines around the periproctal cone and long thin spines of the urchin pictured below suggest this species is a Diadema savignyi. However, banded/ striped pattern of echinothrix character also present. This suggest that this species might be a hybrid between the two species, which is common. 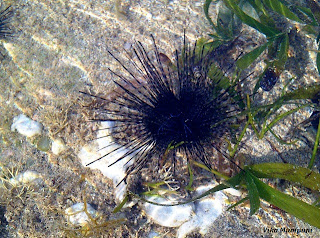 Echinothrix Calamaris
Another venomous urchin is the Echinothrix calamaris. It has two sets of spines, the shorter spines which are dark in color and venomous, and the longer spines that are often banded/ striped in color. 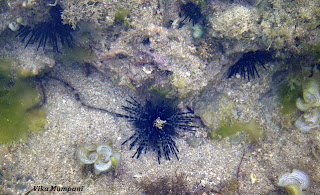 So those are the types of urchins you can find in Nusa Dua Beach, Bali. Sea urchins are amazing creature. If you are careful in your observation trip, you shall not suffer from any puncture injury from the venomous ones.
Location: Nusa Dua Beach, Bali, Indonesia

Popular posts from this blog 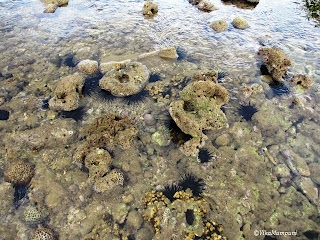 Sea urchins are commonly present on shallow rocky area. Although most of them are not venomous, some species of long-spined and fire urchins are. So here are some precautionary steps to avoid urchin sting injury and measures to treat it:
Prevention •Do not walking barefoot on the intertidal shallow rocky area. The long-spined urchins often hide in the rock/ coral crevices. •Look carefully when exiting the ocean, particularly in areas that are rocky, have coral, or ironshore coral. If an exit is covered with urchins, try to pick an alternate exit to avoid injury.
Sea Urchins Puncture Symptoms •A puncture injury from a sea urchin can cause swelling and redness around the area, which may lead to severe pain and infection. •Multiple deep puncture wounds may cause more serious symptoms such as fatigue, weakness, muscle aches, shock, etc. ﻿ ﻿Treatments •Immerse the affected area for 30-90 minutes in water as hot as the injured person can tolerate. Repeat as necessary to control pain. •Use twe…
Read more 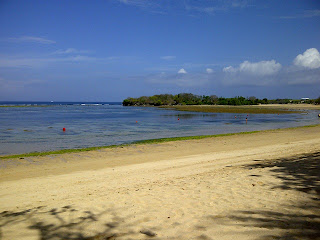 I live in Indonesia, a tropical country. However, I used to not much of a beach person for I just can’t stand the intense heat of the beach. That was the main reason when my best friend and I decided that we would do a “cultural trip” only and promised to avoid the beaches on my first trip to Bali on February 2011. (Can you believe it? We went to BALI, the Island of Gods, which is famous for its great beaches and not planning to see any beach?) Well, apparently Bali had a different plan for me. It’s like fate, my first time to Bali was actually the beginning of another 4 Bali trips on the 2011 alone. From then on, I just fall in love with Bali and its beautiful beaches, particularly the intertidal ones.

Intertidal beaches are rich ecosystems for marine wildlife. They are the place where organisms live between the low and high tide. The intertidal area of sea grass or rocky reef will be exposed at the low tide and thus available for observation without diving or snorkelin…
Read more